In the European context the term digital sovereignty is complicated. There are many parties to the discourse and they refer to different aspects when using the term. This post is the first, in a two part series, that aims to untangle it.

It does so by (re)introducing multiple terms within to name a sovereignty as related to the digital in accordance with the relevant tech stack.

Evolution of the term

First, a brief recollection of the initiatives towards and stakeholders of digital sovereignty in Europe. Calls for European digital sovereignty were voiced as early as the 1960s. After the US government blocked IBM’s selling of its supercomputer which the French required for finalizing its nuclear program, France reacted by setting up Plan Calcul to create “an indigenous computer industry”.

Throughout the 70s and 80s, different European scientific and industrial initiatives worked on guaranteeing “network sovereignty and interoperability” for the service of an open market by building regional data exchange alternatives (to the siloed ones). EURATOM along with 8 member states’ setting up of COST is one such example.

Another example of network sovereignty happened in the wake of the 1978 report on the “informatization of society” that was backed by the French president at the time, Valéry Giscard-d’Estaing. This created EURONET and CYCLADES.

Throughout the 90s, this effort was continued further by different telecommunications and regulatory bodies (along with industry cooperation) and the TELEMATICS2 program was set up under the Maastricht Treaty.

Many of the projects mentioned above were discontinued but more and more individuals, companies and public services were interacting online. The amount of data created by them elevated the importance of data and information storage protection.

Throughout the 90s and early 2000s, data protection laws were adopted and the German and French governments wanted a European way of organising the world’s information by starting to work on a “Google Competitor”.

It was also the time when calls for computing for public good and freedom of the internet (stack) were voiced by citizens, open source advocates and civil society groups (see Amsterdam’s and Bologna’s initiatives).

At this point, sovereignty in the virtual or technological space had passed through the hardware, software and data layers and was further contested over by policy makers, industries and individual users. 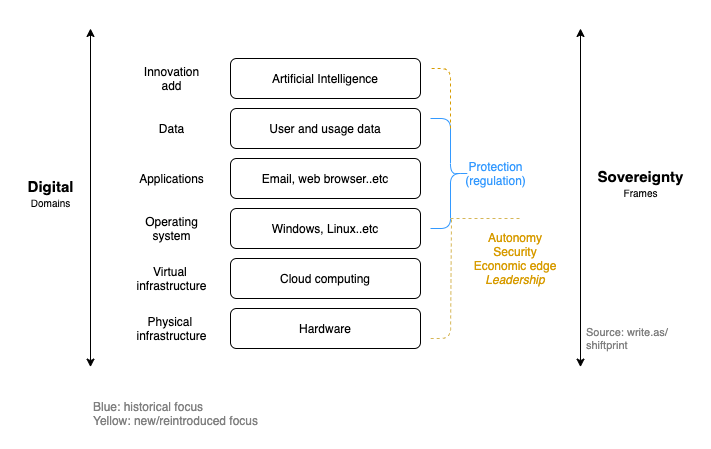 The increased generation of personal, industrial and otherwise sensitive data heightened the importance of and/or need for secure and unimpaired data storage and processing.

The solution to address this – and as an expression of the capacity to act – was to create a cloud storage European alternative. These were CloudWatt and Numergy. They were set up by 2012 and by 2020 were no longer operational.

As shown above, there are many parties to the debate and each have their foci and preferred ways to approach the subject. What follows is an attempt to organise and distinguish different digital sovereignties.

The framework below takes the technical stack at its core in an effort to arrive at a more accurate description of a particular element of digital sovereignty.

In the framework, referent object stands for the object or ideal towards which claims of digital sovereignty are being extended to. The term is borrowed from Copenhagen School’s of Securitization/ international relations theory but is used here differently and not in security terms as originally posited by its founders. 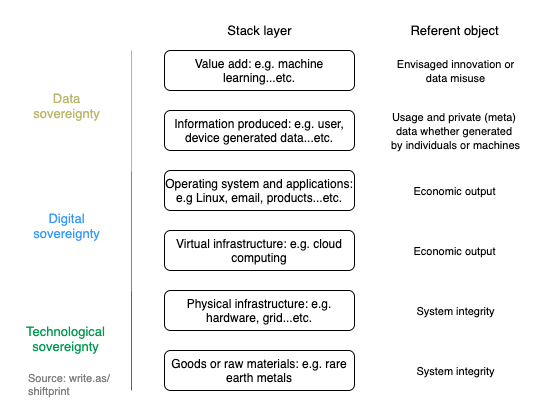 In addition to physical infrastructure and the raw materials that go into the production thereof, a well educated labor force also makes up technological sovereignty. This is because technology is understood as the collection of knowhow as well as methods employed towards innovation such as 5G and fibre optic cables.

Cyber sovereignty discussions often take place within these two layers, for example when taking about SCADA systems security and to safeguard the integrity of these systems in general. It is left out of the diagram; however, due to its securitized connotation which involve different bodies and a different set of actors.

Digital sovereignty as referred to in the diagram and not in today’s political-industrial discourse stands for the layer of service and tools rendering – via 1s and 0s – information. Electronic or network sovereignty sits between these two layers whose referent object is the sovereignty of computer systems as first order consequences and this of its users and engineers as a second order consequence.

The two top most layers of the stack is where the concentration of concern for most individual internet users lies. Fears of information interception, misuse, tampering or weaponisation is represented in calls for privacy and security online. In academia as well as policy, data sovereignty was used on average 4 and 13 times more respectively than sovereignty related to the digital and technological between 2015-2018 vs the preceding three years.

While the potential for economic benefit exists in all three layers, within data sovereignty it is arguable more pronounced. Machine learning and other technologies require huge amounts of data to create more value at the cost of the above concerns.

The framework in practice

If technology is the collection of goods and raw materials that go into the production of an advanced system, digital is the rendering of information or services via a digital format and data is the output of the former two, it is clear that the three terms are separate and sovereignty over these systems varies in approach, method and know how.

Efforts such as GAIA-X are working towards digital sovereignty, GDPR is an expression of data sovereignty while aiming to produce 20% of the global chip supply and empower 20 million ICT professionals is technological sovereignty.

I believe the framework above could be even more nuanced and has to be revisited as new technologies, actors and referent objects arise. It also needs refining because there is no correct term to talk about the sovereignty of the whole stack nor one that exclusively grasps the values system.

In the face of this I’m also continuing to use digital sovereignty to refer to all the other layers above and only specifying ex-post when zooming in on an issue. Another observation is that differentiation is very clear at the extremes of the digital sovereignty continuum i.e. data sovereignty vs technological sovereignty. Where clear lines exist, it is already helpful to start to use this.

Absence of nuance of the term in practice also results in confusion among the actors working towards it. For example, the letter by 30 German civil society organisations outlining the desire for reclaiming digital sovereignty to the service of the citizens.

Akin to the examples mentioned in the historical recollection in the opening paragraphs, digital sovereignty is discussed not only across the technical domain but also in terms of asking for policy/discourse access and contribution.

Perfect is the enemy of the good and this applies in tech as much as in academia. If you made it this far reading, first of all, thank you! Part II will cover different actor and stakeholder networks.

The framework above will be updated throughout my research and if you’d like to contribute to it with corrections, comments or questions – I’m very happy to hear you out. Please forward this piece to someone who you think might find it interesting, reach out on @ShiftPrintBlog or signup to receive more reflections and articles!